The Battle of Midway: 75th Anniversary

The first week of June 75 years ago in 1942 was the first naval battle in history where the two opposing navies were never in visual contact with each other. Only six months after the Japanese attack on Pearl Harbor and one month after the Battle of the Coral Sea, the US victory in the Battle of Midway inflicted devastating damage to the Japanese fleet. The United States Navy was led by Admiral Chester Nimitz and the Japanese Navy by Isoroku Yamamoto, the Japanese architect of the Japanese victory at Pearl Harbor. Noted military historian, John Keegan stated that this battle was “the most stunning and decisive blow in the history of naval warfare.”

The story of Midway is a shining example of bravery and sacrifice from sailors across the Pacific. A story of steadfast determination and necessary ingenuity. A reminder of the fighting spirit of the Navy that is always present when and where it’s needed. As we honor the 75th anniversary of Midway on June 4th, we must remember the sailors who served the cause, the lives that were lost, and the aircraft and ships that went down in the fight. 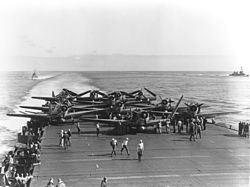 Extraordinary contributions were made by thousands of Sailors, including much of the Navy’s leadership. Admirals Chester W. Nimitz, Raymond A. Spruance, William Frederick Halsey, Jr., and Frank Jack Fletcher together commanded and led the battle boldly and decisively. Code breaker and Captain Joseph John Rochefort led the team that broke the Japanese JN-25 code. Aviator and Ensign George Henry Gay, Jr. was the sole survivor of Torpedo Squadron 8. Aviator and Captain Clarence W. McClusky led the air group scout bombers that sunk two of the Japanese carriers. Submariner, Lieutenant Commander John W. “Spuds” Murphy of the USS Tambor (SS-198) managed to damage two Japanese ships without firing a torpedo. Together with the rest of the sailors at Midway, they helped the United States dramatically alter the outcome for the war in the Pacific.

The Japanese operation, like the earlier attack on Pearl Harbor, sought to eliminate the United States as a strategic power in the Pacific, thereby giving Japan a free hand in establishing its Greater East Asia Co-Prosperity Sphere. The Japanese hoped another demoralizing defeat would force the U.S. to capitulate in the Pacific War and thus ensure Japanese dominance in the Pacific. Luring the America aircraft carriers into a trap and occupying Midway was part of an overall “barrier” strategy to extend Japan’s defensive perimeter, in response to the Doolittle air raid on Tokyo. This operation was also considered preparatory for further attacks against Fiji, Samoa, and Hawaii  itself.

The battle involved seven aircraft carriers, including four of the five Japanese carriers that took part in the attack on Pearl Harbor, Akagi, Kaga, Soryu and the Hiryu. All four of these Japanese carriers were sunk. While the Unites States only lost the carrier Yorktown and one destroyer.

The USS Yorktown was badly damaged during the Battle of the Coral Sea. She was in dry dock in Pearl Harbor for repairs in May 1942. On May 29, 1942, The Yorktown left Pearl Harbor and rendezvoused with the USS Hornet and USS Lexington.

Did you have fathers or grandfathers who fought in this battle? Are they still alive, do you have their story about this tremendously important battle? This battle changed the course of the war.

If you have the time watch the 1976 film, Midway, which recreates the battle. If you have a Netflix account you can watch the 18-minute documentary directed by John Ford, The Battle of Midway, where he captures combat footage of the Battle of Midway, an air and sea campaign that was a turning point in the war of the Pacific. John Ford was wounded by shrapnel while filming the battle and awarded the Purple Heart for his service.

Take time this weekend to remember any family members who fought in this decisive battle. If any family are still alive talk to them, record their stories!  Since Memorial Day was just last weekend, the anniversary of the Battle of Midway often gets lost in our memories.